The greyhound is a breed famous for its super-quick acceleration and remarkable speed, and a greyhound in good condition can go from zero to 64 km/h during the first 30 meters of the racecourse. For short distances, the world´s fastest greyhounds can maintain a top speed exceeding 70 km/h. 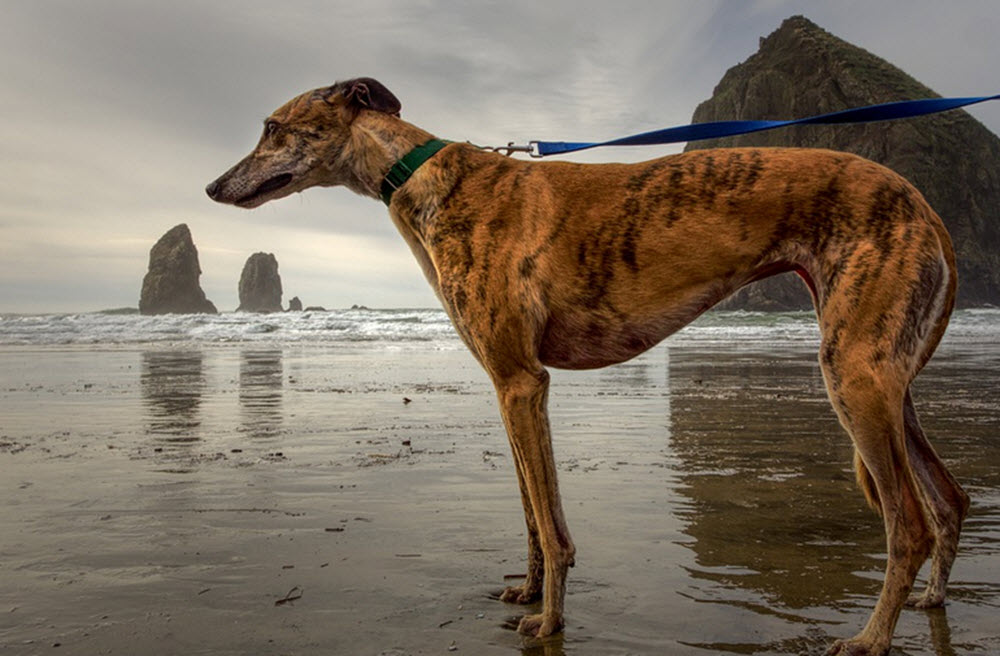 The greyhound is an English breed, developed from sighthounds used for open-land hunting in England. Other examples of English sighthound breeds are Whippet and Scottish Deerhound. The greyhounds used for hunting in England would spot the prey at a distance, run fast enough to catch it, and then kill it. They could also be trained to carry the animal back to the humans.

All sighthounds are slender dogs with excellent eyesight and the ability to run very fast. Due to their ability to spot prey from far away, they are also known as gazehounds. Sighthounds are by no means not unique to England; they have been hunting with humans for thousands of years in various parts of the world, including several ancient civilizations in the Mediterranean region and in Asia Minor. We know that the ancient Romans hunted with sighthounds, and the first sighthounds in England were probably specimens imported by the Romans during the Roman occupation.

Today, the greyhound´s hunting instinct chiefly get to shine at the racecourse and during lure coursing. Originally, lure coursing involved real prey, typically a rabbit or similar. Nowadays, a mechanical animal is used in most parts of the world where lure coursing contests are held. The mechanical animal moves in an erratic fashion over a field, mimicking the way a real animal would move when hunted by a predator. The tradition of lure coursing is older than dog racing contests on race tracks. Dog racing is all about hitting the finish line before any other dog. Lure coursing is more complex since judges will award points in different categories, looking not just at speed but also judging the dog on factors such as exhibited enthusiasm, endurance and agility.

The modern greyhound breed consists of two categories: show dogs and race dogs. Race dogs are bred for success at the race track, while show dogs are bred to win dog shows. Both are also kept as companion dogs and both categories can do well in lure coursing competitions.

The health profile differs a bit between the show dogs and the race dogs, with certain eye problems being much more prevalent among the race dogs. Race dogs are also more likely to become injured, as they compete at very high speeds close to each other. Wounds and claw damage can easily happen in the heat of the moment.

Both show dogs and race dogs are known to have very healthy hips, especially considering their size. The breed as a whole has a heightened (but still small) risk for certain heart problems, epilepsy and bloat.

The mind of a greyhound

This high level of independence is important to keep in mind when training a greyhound and keeping it as a companion dog. Greyhounds are typically affectionate and develop strong bonds with their family, but they aren´t the best breed for someone who wants their dog to win obedience trails. Training them to function well as companion dogs and obey basic commands is definitely possible, but they are not German Shepherds or Australian Cattledogs.

Greyhounds are playful and mature slowly. Many greyhounds seem to somehow understand what human laughter means, and will clown around to make their humans laugh.